With the increasing number of divorce rates and single parents, and with the advancement of medicine and consequently seniors lifespan, senior dating is becoming more and more of a thing! In fact, senior dating sites are growing in numbers and popping up everywhere! What are the reasons behind these changes? 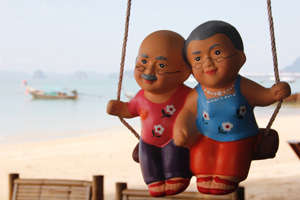 1. The Increasing Number of Divorce Rates

50% of first marriages end in divorce in the United States, according to various researchers. For second marriages, the divorce rate goes up to 60%. Divorce has reached it's highest number in the past 50 years in the American Society. This means that the past relationships of many seniors do not seem to last as long as they used to.

2. The Advancement of Medicine

Medical innovations in surrogacy mean that women don't have to get married to have children, which means that more and more women have the choice to stay single for as long as they want without having to worry about their maternal clock ticking.

Furthermore, advancements in medicine and in sex-aids in specific now enable seniors to become more sexually active and thus have an additional incentive to date.

Finally, the innovations that we have seen in medicine in terms of disease preventions and higher life expectancies in the past 50 years has allowed people to live longer while feeling younger.

What does the internet have to do with the increase in the number of seniors dating, you ask? Simple. Seniors don't frequent the same places that young people do; which are usually designed in ways so that people can easily mingle with and meet other people. For seniors, before the rise of online dating, it was more difficult to meet others. But online dating made the entire process a lot easier, seniors can meet and get to know other people without even having to leave the comfort of their armchairs (which they probably aren't keen to do anyways).

To put it in a nutshell, senior dating has risen in popularity and in numbers because of several factors, some of which are the higher divorce rates, the advancements in medicine as well as the rise of the internet.